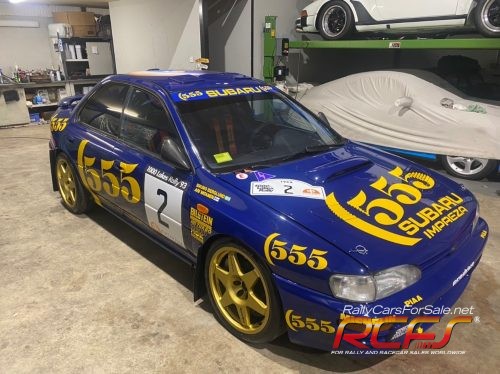 On the surface, it’s among the most historically important examples of Subaru’s second Group A rally car as you’re likely to find for sale anywhere in the world.

This task was shared between the Finn and Colin McRae, though in truth it would be the older man who’d make the biggest impression by chalking up a series of ballistic, crushingly quick stage times, sixteen of which he’d win outright.

Vatanen had the event by the scruff of the neck from the outset, revelling in the new Impreza’s compact dimensions, traction and all-round ‘pliability.’
For a time, it appeared that Vatanen really would be able to deliver to Subaru that most cherished of manufacturer coveted prizes, the debut victory.

The rallying gods had other ideas, however, as Vatanen eventually found his confidence – and thus willingness to really push to the ragged edge – waning, a legacy of a persistent fault with PRO/STI 93.004’s demister system.

Mere moisture vapour thus played an outside role in denying Vatanen the win, with victory eventually going to Juha Kankkunen in the Toyota Celica GT-Four.

Bourne’s association with this car will likely (and rightly) be of particular importance to the eventual buyer.
It was with PRO/STI 93.004, after all, that Bourne effectively ‘iced’ his career, using it to take a famous win on the 1996 Saxon Safari Tasmania Rally.

The car was then purchased by ‘Smoken’ Joe McAndrew in December 1996, and competed in the 1997 New Zealand Rally Championship, after which the car was sold to a private collection in Italy in 2002.

After 18 years unused and in storage, the car has made its way back to Australian shores.

This is an extremely significant and historic Group A WRC car, and is one of the closest things we may ever see to the ‘Holy Grail’ of Subarus.

Now back in the U.K. and nova clearance done and new age related L 555 number plate purchased for it.
Has a lot of great paperwork with it and all prodrive team manager reports and photographic history and confirmation of the provenance of the car from Possum bourne motorsport etc.
correct prodrive chassis number etc and 100 percent been confirmed as the original shell etc by prodrive.
Please no dreamers or stupid questions. For sale at asking price or we just keep it.