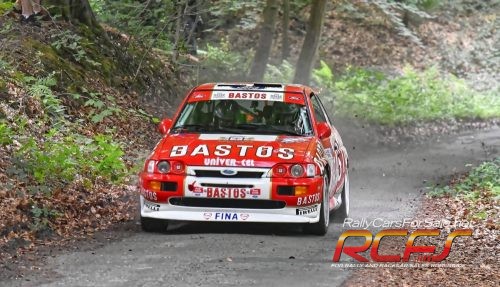 A winner of numerous rallies is the hands of famous drivers

The Ford Escort Cosworth was build in 1993 by Ford Motorsport inside Boreham’s factory in the UK. Famously known by his success in World Rally Championship with among others François Delecour but also in European Championship in the hands of the belgian Patrick Snijers. This man won the title in 1994 with the car issued by RAS Sport in Belgium. It is this car we are talking about, well known with his famous Red & White Bastos livery and his lengendary registration « LLN-574 ». Snijers won also the belgian title in 1993 and 1994. This iconic rally car is now a piece of museum.