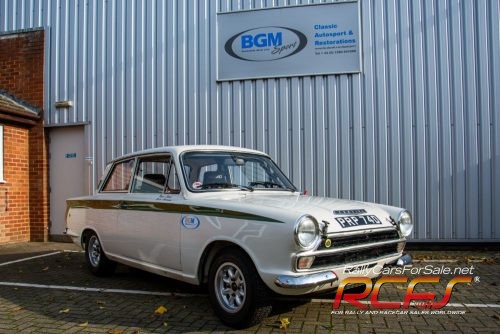 PRP 74D was built by David Sutton Motorsport in 1990/91 from an imported LHD California based car to FIA Appendix K regulations.
Roger Clark & Tony Mason finished 7th overall on the 1991 Autoglass RAC Rally and Roger also drove the car to 3rd overall on the Charringtons RAC Rally in 1992 with David Nicholson alongside.
In 1992 both Colin McRae and Roger Clark swapped cars during a Top Gear and Autosport magazine feature where they each drove this Lotus Cortina and then Colin’s Rothmans Subaru Legacy. The Autosport magazine is in the car file to go with the car and the film of the day is on YouTube.

The car also competed on other Historic events such as the Classic Marathon, Circuit of Ireland, Killarney Rally of the Lakes, Welsh and Scottish rallies with many class and overall victories during the 90’s. The last time the car was used in competition was in 2004 so please note that all safety equipment is no longer in date.

We purchased the car for one of our clients in 2010 and it has lived in our care since then and has had very little use, it was used once at a corporate day and it has twice been to the Goodwood Festival of Speed for a few runs around the rally stage. One of our senior Technicians has carried out work on the car and he re-built the car whilst working at David Sutton Motorsport during the 90’s and it currently sits in a very nice original condition.

The car has a current V5 and is registered as a Historic Vehicle, its original California registration history, original HVIF from 1991 and then again from 1995 and original the original RAC log book.

This car got a great history with Roger Clark and Colin McRae and would still be a competitive car today and priced at £75,000

Other items listed by Ian Gwynne