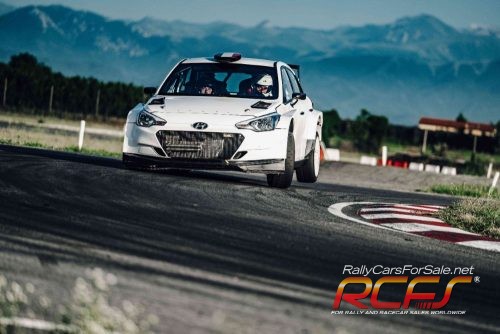 One of the last build, Engine EVO 2, with all the upgrades and settings.

Car has last spec PKM dampers dedicated to “works car”, as constant development was done by the French supplier and the test team.

Hyundai NG i20 R5 has been the first Customer Racing Hyundai Motorsport department car design, developed, starting then a new legacy of car, but the first step of the manufacture in a new challenge in 2016 (homologated on 1st October 2016, just on the eve of the WRC Tour the Corse rally). First events were showing the short development time, but through the years a constant development has raise the performance of the high performing rally car, always been know for his amazing engine power and torque: what is needed to enjoy rally stages on both tarmac and gravel.
This car is sold with a very helpful spare parts package, very useful to allow the owner to run it smoothly in any event, as it comes from the same one used by ERC to manage the top rally programs, on top setup sheets and specific help will be available on request.

Fuel Tank to be checked