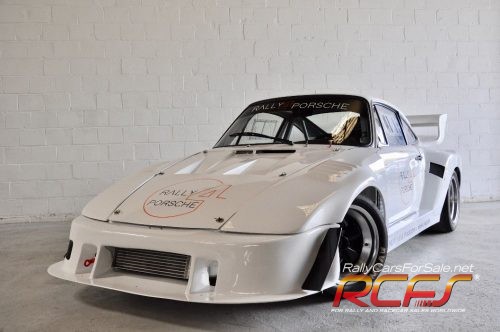 Ever since its competition debut in 1976, the Porsche 935 has excited more than one generation of
enthusiasts. If the « turbo » versions developed by Porsche, and subsequently by teams close to the
factory (Kremer, Joest) or powerful American teams, mainly distinguished themselves on the race
tracks, other variants of the « Silhouette Porsche », in both turbo and atmospheric guise, became
very successful in hillclimb racing.
This was notably the case for the versions built by the Alméras brothers in the European and French
championships, but also for the unique model developed by Gérard de Ville de Goyet for the
Belgian (and Luxembourg) championship.
Having left the factory in 1978 with « Porsche 911 SC » as its official identity and chassis number
#911 830 1546, the car has been progressively modified by the Oteppe based tuner to become the
terror of single-seaters and prototypes it competed against.
Following the white 911 SC’s first appearance at the Marchin hillclimb (4th place in the Provincial
event) in 260 BHP form, it soon becomes a winner, claiming its first victory at the Ry des Glands
hillclimb. For 1981, more power (280 BP) and a flat nose in polyester are added, the latter giving
the first hint of the silhouette car it was to become and already making it a spectator attraction. The
Interprovincial title is the reward at the end of the season, prompting its driver to move up to the
Belgian Championship.
This becomes a reality in 1982 when the Porsche driver, now with 300 BHP at his disposal, has the
opportunity to measure himself against not only F5000, F2 , F3 and Gr. 6 prototype opposition, but
also against other well driven GT cars such as those of French drivers Jacky Cauchy (911) and
Daniel Voisin (935). The latter will take a hollow victory at the Houyet round at the end of the year,
being classified 5th, two places ahead of « DVDG », but only after severely damaging his car in a
crash on the final run.
After this accident, Gérard de Ville de Goyet acquires the wreck and removes a series of parts
(before selling to Manfred Freisinger what was after all an authentic 1974 3.0 RSR… which has
since been rebuilt) before undertaking, during the winter of 1982-1983, the transformation of his
911 SC into a 935 replica.
Having set some remarkable times in 1982, often right behind the F2’s of Bayard, D’Hoe, Evrard
and Buchem, DVDG becomes a genuine threat for the single-seaters, finishing the Belgian
championship in third place in 1983 and claiming the runner-up spot behind Hervé Bayard in 1984.
1985 is an important year for the Belgian tuner and his 935, which now has 340 BHP, because the
combination repeatedly finds itself matching competitors such as Jean Welkenbach (934), John
Lagodny (BMW M1) and the very renowned Giovanni Rossi (BMW M1) and Guy Deybach (930)
whom he notably defeats at Dudelange. He even takes an overall win at Fléron, to which he adds a
substantial number of podium places over the course of the season, and taking advantage of the fact
that the Formula drivers are sharing the victories, wins the overall Championship, ahead of Bayard,
Gosset, Hauser and Debias, no less !
In 1986 and 1987, the car appears to have been powered by an ex-Jean-Louis Dumont SC RS
engine bored to 3,5 litres and « de Ville » again adds two runner-up places in the Belgian
championship to his tally, followed by three consecutive third places from 1988 to 1990. Over the
course of about 50 events (10 per season), the 935 is almost unbeaten in Gr. B/S !
1989 witnesses an aerodynamic evolution of the 935 from Oteppe, which is now blue in Sobelfa
livery, with the fitting of a large rear wing largely inspired by the famous Porsche 935 K3 race car.
The wing will become even taller and wider as the years go by.
However, it is in 1990 – the car is now white with yellow and green Yacco stripes – that the definite
transformation into this « unique 935 » takes place. The car, which has already been running a
guillotine type injection for a long time, is now fitted with a Hewland FG400 gearbox, of the same
type which can be found in F1 cars equipped with a Cosworth engine ! This gearbox allows the
driver to adapt the gear ratios before each hillclimb (the location of the hatch allowing these
modifications is still visible today), a luxury often reserved for … single-seater and prototype
drivers, whom he beats for a second time to win the Belgian championship in 1991, in a car now
sporting a bright orange livery !
In line with 1990, #911 830 1546 is again subject to improvements by the Oteppe tuner for the 1991
and 1992 seasons. Having used standard SC brakes, which are lighter, the driver is now c

Other items listed by Olivier Rocour