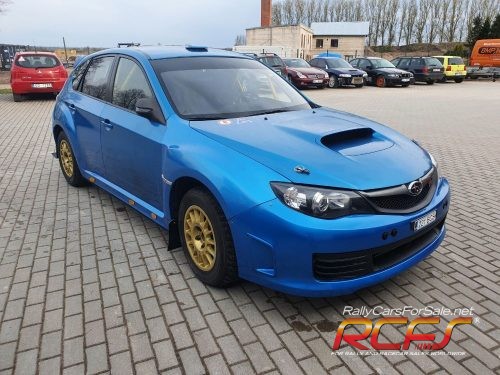 Car was originally bought by Evgeny Novikov in 2008, who managed 2 rallies (one win, one 2nd place) and around 300 kms in tests before switching to Mitsubishi for his PWRC campaign. Surprisingly, Evgeny never crashed this car. 🙂

Car was later sold to Russian businessman who did only one rally and a couple of tests before blowing an engine due to injector failure.

Car has never been used since then, but stored in warm and dry place, so there is no rust and everything is in perfect condition. Engine has been fresh rebuilt in February 2021 and has 0 kms mileage on it. New turbo, new injectors. New Prodrive dog box has been installed 200 SS kms ago.

Car has been fitted with new seats and belts. Fire extinguisher system has just been service. Car is mapped on 98E fuel at the moment, but has not been mapped since engine rebuild.

The car is absolutely must-see, and no doubt best Prodrive N14 Subaru available. Registered on private person, so is sold with 0% VAT.

More info and pictures upon request. Car located in Latvia.