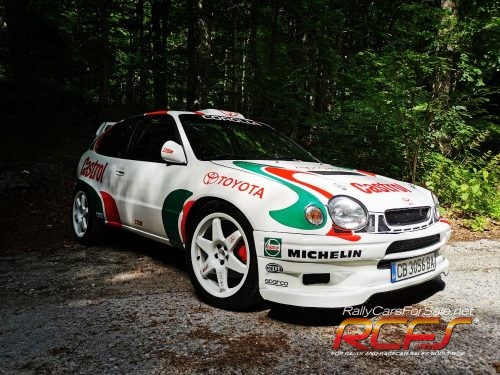 A fabulous recreation of Toyota Corolla World Rally Car built by Dunev Motor Sport one of the foremost experts in building and preparing Racing Vehicles.

The vehicle is based upon the 1997 E110 version of Toyota Corolla road car.

The original TOYOTA Corolla WRC was introduced in July 1997 and made its debut at the 1997 Rally Finland with Didier Auriol and Marcus Grönholm behind the wheel.

The car was powerd by a modified 3SGTE engine with water cooled turbo system producing 299 bhp. For the 1998 WRC season the TOYOTA TEAM EUROPE was joint by Carlos Sainz and Louis Moya who won the 1998 Rally Monte Carlo. Didier Auriol won the 1999 China Rally and TOYOTA won the 1999 manufacturer’s title.

The gearbox is an E151F from Celica GT4 Carlos Sainz ST-185 and permanent AWD.

All the decals and stickers were carefully replicated as well and layered on the exact spots.

The small numbers of competition cars around 100 ever build and the fact that TOYOTA never made a road legal version makes the ownership of such vehicle a privilege that only a few can enjoy.

The car that we have custom build is a daily usable re-creation of the WRC legend and our personal tribute to the Rally sport.