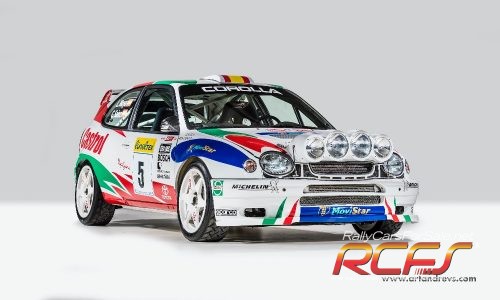 We are delighted to offer the TTE Corolla WRC chassis 609 which was registered on December 19th 1997 « K-AM 307 ». This car is no less than the most titled of the Corollas, it actually scored in the hands of Carlos Sainz two of the Corolla’s four WRC victories. He drove this very car to a masterful victory at the Monte Carlo and Rally New Zealand plus a 7th place finish in Spain. It also finally competed in Rally Australia with Loix, scoring a 6th place. Back then it was very rare that the same chassis won two rallies due to the high level of competition and the fewer number of races compared to nowadays. From a period article it was reported that the last time this happened was in 1993 with Kankkunen.
The car went to Toyota Team Sweden in 2000 and competed in four rounds of the WRC with a remarkable 8th place finish at the Acropolis. It later went to Toyota Team Denmark and was driven by Jens Mulvad. Twice in 2000 & 2001 it was victorious in the Danish Championship still running under Castrol colors. In 2002 it was sold to well known TTE specialist Wevers Sport in the Netherlands and appeared in WRC for the last time at the 2002 Deutschland rally. Wevers rented the car to several customers until selling it to the other well know TTE specialists DMS – Belgium before it was sold in 2008 to Christian Vincent who kept the car until 2016.
The following owner, a collector, ordered a bare shell restoration to exacting TTE specifications by Wevers for the chassis and DMS for the mechanical components and assembly. An extensive photographic record is available and shows the stages of the work. The bodyshell was put on a jig and repaired where necessary. The roof was replaced along with the floors as part of a detailed restoration to the most exacting standards. The mechanical components were completely renewed and the car was delivered in immaculate condition, ready to achieve its full potential.
The car is presented today in stunning condition, exactly as it was raced by Sainz in the 1998 WRC with less than 1000km covered only in demonstration runs since its total restoration.
It comes with the FIA « Gold » Passport and its original « Fahrzeugbrief » with K-AM 307 registration.
Chassis 609 is an amazing opportunity to acquire a « Monte Carlo Winner » with an outstanding rallying pedigree in immaculate and race ready condition.